– for Six Months it was all Here!

Forty years ago, Knoxville hosted a world’s fair to highlight ways of dealing with a future with limited supplies of energy. Planned during the Energy Crisis of the 1970s, the big fair, originally known as the Knoxville International Energy Exposition, presented hundreds of solutions, both in terms of conserving energy and in finding new sources of it. But there was a lot more to the big party.

What can you say about the 1982 World’s Fair to someone who doesn’t remember it? Well, there are lots of ways for those that did experience the fair to revisit it, while the rest of us can attempt to understand what the hoopla was all about through a series of public events, exhibitions, and other program tie-ins during the 40th anniversary year.

Thanks to a grant from Humanities-Tennessee, KHP will produce a short booklet about the history and the lasting impact of the World’s Fair as part of public lecture in May, coupled with a series of podcasts to be produced and aired by WUOT Radio. Events that KHP will directly be participating in will be listed on our Events Page.

A web version of the booklet, “The 1982 World’s Fair in Hindsight” by Jack Neely can be read online HERE. A version in PDF format can be requested by contacting Paul James at paul@knoxhistoryproject.org.

Recorded versions of recent talks on Zoom about the 1982 World’s Fair can be found HERE.

Relive the Fair or Experience it for the First Time: Click on the above flickr banner to browse more than 600 photographs of the 1982 World’s Fair, all shared by members of the community through KHP’s Knoxville Shoebox initiative! Some fair goers queued for up to 4 hours to get inside the China Pavilion. (Photo by James D. Baeske.)

KHP is proud to share details about a new series of podcasts produced by the UT History Department and WUOT radio featuring former KHP Board member, Prof. Ernie Freeberg, and current board member, Dr. Shellen Wu. 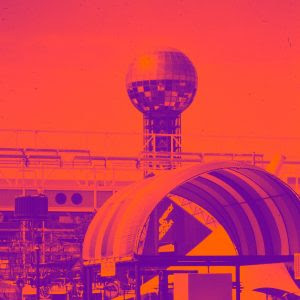 “The Knoxville fair took place at the tail end of the Cold War, which was a turning point in America’s views of its place in the world, its environmental policy, and its ideas about urban planning and design,” said Ernest Freeberg, professor and head of the UT Department of History and co-host of the podcast. “Like any other world’s fair, there is much to be learned from a closer and more analytical look at the Knoxville fair.”

The four-part series analyzes and explores themes of the 1982 World’s Fair that include:

Listen to the four-part podcast series at tiny.utk.edu/worlds-fair-podcast. Visit the Sunsphere at World’s Fair Park, a one-of-a-kind structure especially built for the 1982 World’s Fair.

Take the elevator to the 4th Floor Observation Deck, which offers a breathtaking 360-degree view stretching from downtown to the Great Smoky Mountains including World’s Fair Park, the Tennessee River and the University of Tennessee Campus.

A portion of the entry fee supports the Sunsphere Fund. Learn more here.

THE STORY BEHIND THE SUNSPHERE: Learn more about Knoxville’s iconic structure in an illuminating podcast from Knox County Public Library. Bill Denton, principal of Community Tectonics, one of the creators of the Sunsphere, talks about how and why it was created, and the many obstacles that stood in the path of the unique 266-feet high elevated globe. Find the podcast here. “You Should Have Been There!” – runs until October 9, 2022 at the Museum of East Tennessee History (601 S. Gay Street). The exhibit traces the development of the fair from conception to the pivotal moment when The Wall Street Journal referred to Knoxville as a “scruffy little city” and questioned its ability to host an international event.

The negative publicity, however, brought out the “I’ll show you spirit” and stiffened local resolve to make it a highly successful fair. More than 11,000,000 visitors from around the world were informed and entertained in the various pavilions, exhibitions, and attractions put on by 22 countries and some 50 private organizations. Popular fair souvenirs were shirts and buttons proclaiming, “The Scruffy Little City Did It!”

The fair’s theme, “Energy Expo,” played to the region’s reputation as technology and science center. In fact, it was at the 1982 World’s Fair that users were able to try out a touchscreen for the first time. To honor that spirit of innovation, “You Should Have Been There!” incorporates engaging touchscreen experiences alongside, of course, displays of original fair materials from pickle pins to deely-boppers and everything in between.

The Museum of East Tennessee History  invite you to come visit this “scruffy little” exhibition, as Knoxville looks back on—and revives the spirit of—when the world came to town!

The Knoxville History Project would like to thank the following for support for our 40th anniversary World’s Fair programming: